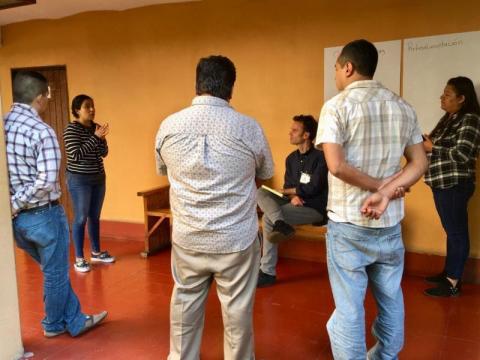 It’s been a month since we launched our new report, Fake Jobs For Sale: Analyzing Fraud and Advancing Transparency in U.S. Labor Recruitment.

For members of CDM’s Migrant Defense Committee (“Comité”), a group of over 80 worker leaders and their families, recruitment fraud is part of everyday life. And now, their commitment to combat fraud is stronger than ever.

The Comité held its annual meeting in Mexico City in October, where worker leaders focused on designing community-centered strategies to prevent fraud. Comité members facilitated dynamic sessions alongside CDM staff — from analyzing the current political context to discussing the causes and effects of fraud. The weekend was filled with power.

At our report launch in Mexico City, Comité members Elisa Martínez and Javier Trejo bravely shared their stories with an audience of over 70 fellow workers, advocates, government officials and media. At the end of the event, Adareli Ponce Hernández stood up to read a collective statement issued by the Comité:

Since then, Fake Jobs for Sale has garnered coverage in influential publications in Mexico and the US, including Aristegui Noticias, Proceso, Animal Político and The Nation, featuring worker voices and commentary by CDM staff.

Comité members are back in their communities and ready to mobilize. Amplifying worker voices is at the core of Comité activities for 2019. Worker leaders have resolved to increase their presence in local media by participating in radio campaigns. Comité members will be speaking about how to use Contratados.org and how to verify U.S. job offers on radio stations in Veracruz, Zacatecas and Hidalgo. In areas where recruitment fraud prevails, every radio is a device to increase transparency.

If you haven’t read Fake Jobs For Sale, now’s the time. Don’t forget to share with your networks and on social media!