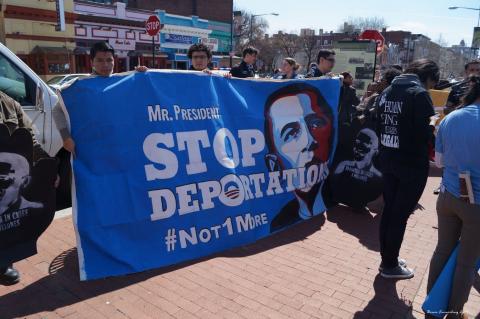 Immigrant communities and labor and advocacy groups celebrate an important step made by President Obama to improve the lives of immigrant families and workers. On November 20, the President announced his plans to begin fixing the broken immigration system in the U.S.

The President created a new program called Deferred Action for Parental Accountability (DAPA). Under this program, persons will be temporarily protected from deportation from the United States and receive work authorization. The qualifications to be eligible for DAPA are the following: a person must

Even if you are eligible for DAPA, the application process has not started yet. The process will begin within 180 days of the President's announcement or by May 19, 2015. In order to apply there is a $465.00 fee and a requirement to pass a background check. If approved, persons can receive deferred action for three years. This is a temporary status and is not a green card or citizenship. Avoid fraud and people who claim they can obtain benefits for you immediately. The application process has not yet started.

The President also expanded a program called Deferred Action for Childhood Applicants (DACA). DACA allows persons to temporarily continue to live in the United States without fear of deportation and provides them with work authorization. The program has been expanded and will cover people who entered the United States before their sixteenth birthday and have lived in the U.S. since January 1, 2010. Previously, there was an age limit of 31 for the program. The President removed the age limit.

The basic requirements for DACA that remain the same are the following: a person must

The expanded DACA should start within 90 days of the President's announcement. If accepted, applicants will receive deferred action for three years and work authorization. The application process for expanded DACA has not yet started, but people can continue to apply under the 2012 DACA process.

The President announced that he will be streamlining the process for spouses of lawful permanent residents to get their green cards through a waiver process that is currently available to spouses of U.S. citizens.

Finally, there are some enhanced protections for workers through the President's immigration action. The Department of Labor will now be able to certify U visas for fraud in foreign labor contracting, extortion, and forced labor. The Department of Labor will also be able to certify visas for victims of human trafficking, including human trafficking for labor. As a part of the immigration action, the President created a working group of government agencies to help seek solutions for immigrant workers.

Please consult a licensed attorney who is knowledgeable about U.S. immigration law if you have any questions.