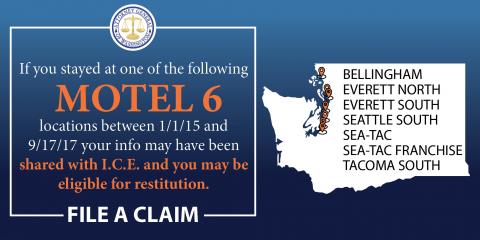 Individuals who rented a room at a Motel 6 in the state of Washington between 2015 and 2017 may be eligible to participate in a financial settlement to compensate them for discrimination and privacy violations.

Employees at seven Motel 6 locations in Washington State voluntarily shared guest registry information, such as names, driver's license numbers, and birthdates, with Immigration and Customs Enforcement (ICE) without a warrant — violating their guests’ privacy and Washington law. ICE would circle Latino-sounding names, leading ICE to question, arrest and even deport guests. Over 100,000 guests are entitled to receive restitution from the $12 million USD settlement the Washington Attorney General’s Office (AGO) negotiated with Motel 6 to resolve the lawsuit. In order to receive compensation, individuals must submit a claim, which does not require guests to disclose their immigration status, by December 31, 2019.

The amount victims receive will vary depending on the extent of the harm that occurred as a result of having their private information shared with ICE. Even if Motel 6 only shared their name and private guest information, and no other harm occurred, victims may be eligible for recovery for that violation of their privacy. If additional harm occurred, including questioning, detention or deportation, victims may be eligible for additional recovery.

As part of the settlement, Motel 6 will no longer hand over guest information without a warrant or other lawful basis and train their employees accordingly. The Washington Attorney General’s Office will monitor Motel 6’s policies and training for the next three years.

There are seven Motel 6 locations in Washington State where the privacy violations are alleged to have occurred.