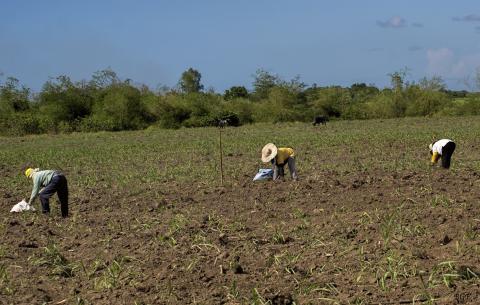 Each year, hundreds of thousands of Mexicans arrive in the United States with temporary work visa programs, including J-1, H-1B, H-2 and TN, under the North American Free Trade Agreement (NAFTA). The United States depends substantially on the work of Mexican migrant workers to forge, maintain, and grow key NAFTA-related industries, including agriculture and food processing, among others. The numbers speak for themselves; in the year 2015, the U.S. government issued a total of 108,144 H-2A visas and 69,684 H-2B visas. Mexican nationals accounted for 94 percent of the beneficiaries of H-2A visas and 74 percent of H-2B visas. In other words, more than 153,000 Mexican workers traveled to the US under the H-2 visa programs that year.

Migrant workers are especially vulnerable to rights violations due to the lack of accountability and inadequate enforcement of labor protections. The current process has left workers waiting without justice or even a response from the governments for over a decade.

In the past, Centro de los Derechos del Migrante, Inc. (CDM), its allies and the leaders of the Migrant Defense Committee have filed two official complaints under the North American Agreement on Labor Cooperation (NAALC), an agreement parallel to NAFTA, following the U.S. government’s failure to uphold the principle of non-discrimination during the recruitment process in Mexico and to monitor compliance with its own labor laws. However, responses from the government have been disappointed as they have taken too long and have not taken into account some key recommendations on fundamental labor protections for migrant workers and to ensure government accountability.

Now, YOU have the opportunity to help strengthen the rights of migrant workers under NAFTA. The United States International Trade Commission has opened a public comment session so your voice can be heard. You have until Monday, June 12, 2017 to send a public comment about the government of the United States. Below, we explain how to demand that labor protections for migrant workers under NAFTA be increased:

Step 2: Copy the text of the Model Comment below and paste into the box labeled “Comment.” Feel free to add to or edit the comment! If you’re not a migrant worker, replace the first phrase of this letter, for example, with “As a defender of migrant workers…” or another adequate phrase.

Step 3:  Fill out the following mandatory fields with your information (if you can’t answer something, fill it with N/A or 00000).

Step 4: Check the box next to the platform’s terms to indicate you understand you have read and understand the statement, “You are filing a document into an official docket. Any personal information included in your comment text and/or uploaded attachment(s) may be publicly viewable on the web.”

Currently, hundreds of thousands of migrant workers are hired each year to work in the United States with a temporary work visa, including H-2A, H-2B, J-1, H- 1B, and the TN visa, as established by NAFTA. They work in American companies -- small, medium, and large -- throughout the country. Although NAALC expresses the interest of each signatory state in providing migrant workers with "with the same legal protection as the Party's nationals in respect of working conditions" in its territory, the evidence shows that migrant workers regularly suffer labor abuses, including wage theft; contracts violations; and discrimination by age, sex, or national origin, among others. Rights advocates have also documented cases in which migrant workers are in labor-trafficking situations after entering the United States on a temporary visa. Workers with different types of visas also report having paid high recruitment fees and incurring debts that expose them to more vulnerabilities in their American jobs. And in suffering abuse, workers with different types of visas often face insurmountable obstacles to access justice for their claims. These cases are evidenced in the public communications MEX 2011-1 and MEX 2016-1, related to petitions under NAALC.

NAALC ostensibly provides all workers with recourse to action through the receipt of public submissions. The proscribed mechanism, however, is inadequate in addressing workers’ rights violations in the United States. The modernization of NAFTA is an opportunity to build upon lessons learned from the agreement’s first 25 years, and it should necessarily:

As negotiating objectives are considered in the modernization of NAFTA, I urge the signatory states to address the abuses of migrant workers, strengthen labor rights, and ensure an effective complaint mechanism that provides justice to migrant workers.