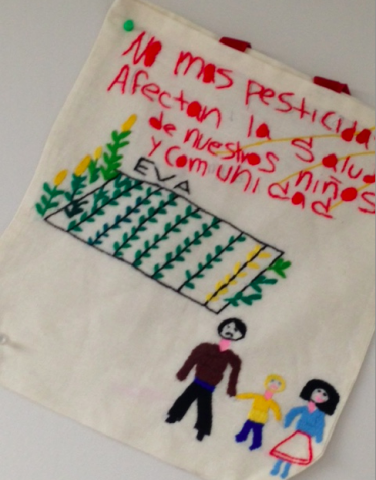 The life of a farmworker woman is this: she has to work in the sun, the rain, the fog… They are forced to work because they have to support their families.

I was working picking bell peppers. One time I got very sick. My eyes were irritated and I had a stomachache, vomited, had diarrhea, everything. I didn’t know - I didn’t understand why this happened to me.

On January 13, five representatives of the Alianza spoke with Delia Saldivar of Radio Bilingüe about the campaign. They shared stories about farmworkers’ experiences with pesticides, as well as information about new Environmental Protection Agency (EPA) regulations regarding the use of pesticides in the fields.

Listen to the program from the Voy Contratado: Migrant Rights on Radio series here.

These new regulations, released by the EPA in the fall of 2015, establish new worker protections for farmworkers who are exposed to pesticides. “This is truly an important victory for us,” said Paola Betchart of the Worker Justice Center of New York. “These regulations had not been updated since 1992, and the changes represent years of work by several organizations across the country.”

As part of the Satchel Campaign, the organizations that make up Alianza de Campesinas will organize events where people will decorate satchels with images, stories, and information about the impact of pesticides on their health. “Making an effort to include directly affected people in making and designing art demonstrates that people themselves can help create change. That is what we believe,” said Mily Treviño Sauceda, director of Alianza.

Throughout January and February, campaign events will be organized in Arizona, California, Florida, Indiana, New Mexico, New York, Washington, and Mexico. You can find more information about those events on Alianza Campesina’s Facebook page.

Have you worked in fields where pesticides are used? Visit Contratados.org to read other people’s stories and share your own experience. Share your story today to help build the movement for informed labor migration!